Alone in the Woods

Just in the nick of time. IT ARRIVED!!!! Crisis averted. See, no reason to get my panties in a bunch.

Race day was upon us. With 350 miles staring us down somehow there was a calm in the air. Any reservations I may have had leading up to this was now gone. We load our sleds onto coach buses and take a hour long bus ride to what seems like the end of civilization. The race starts at a bar on the edge of Knik lake. During the ride I make one final call to the #UltraWife to tell her I love her and to catch up on the days happenings. I wasn’t sure I’d have service for any of the next ten days.

At Knik we unload and file into the bar to place our orders for what could be our last real meal for 10 days. We have a hour and a half to burn before the start of the race. I order a cheeseburger basket along with a couple cokes. The fries and burger were nothing short of spectacular. The fries were crinkle cut and crispy as could be. Just the way I like them.

After slowly eating I head out to my sled to get some starting area pictures and visit with other racers. I talk with my good buddy Steve Cannon and wish him well on his 1000 mile trip to Nome. He is the epitome of #Dreambig and #Nolimits. Check him out at: (https://www.expandyourpossible.com/)

Steve is doing amazing things. He is raising money to fight Cancer while also making a movie about the Iditarod Trail Invitational.

At 2pm the gun is shot into the air and we are off. It was of course a real gun as this is Alaska after all. They don’t call it the final frontier for nothing. 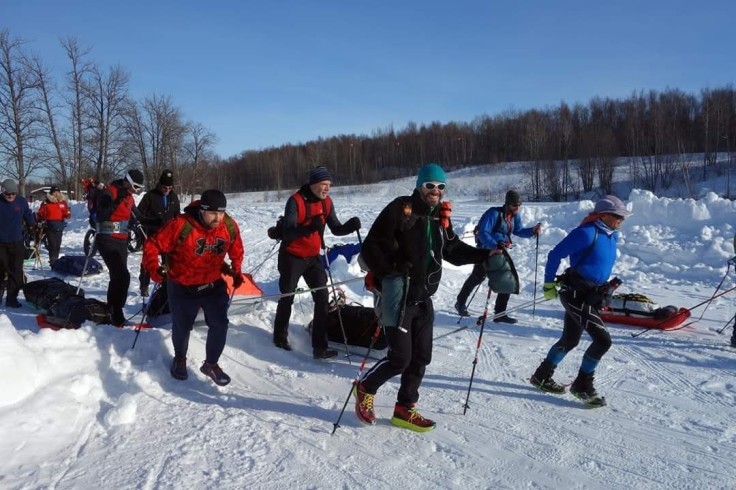 We didn’t have a set plan, but if Paul Schlagel and I could we’d stick together as much as possible. We have run hundreds of winter miles together in pursuit of the order of the Hrimthurs. (http://orderofthehrimthurs.com/) The weather was about perfect, probably mid 20’s and a blue bird day. Any forecast I could find had a lot of the same and no real cold even for the overnights. I should now better than to go by any forecast after some of our recent Arrowheads. With the race starting at 2pm we didn’t get very far before the sun began to set.

Yet another unique feature of this race is that there is no set course. As long as you hit the checkpoints you could take any route you want. That first day we saw experienced runners and bikers turning around after going down what they thought was a wrong trail. Most of the time had they kept going they would have most likely met back up with the route everyone else had taken. We tended to stick to the GPS route Paul loaded into his handheld GPS unit. In retrospect it may not have always been the most direct or packed down trail, but it kept us heading in the right direction. This was one of my biggest concerns leading up to the race. By midnight, while alone, I was about to miss a turn as runners, bikers, and a skier ahead of me were back tracking towards me. Thankfully this prevented me from doing the same. By this time the temps had plummeted to almost -28F with a pretty strong wind. The temps surprised a lot of us given the projected forecast. At the time I was only wearing one layer on bottom and two on top. I knew it was getting cold by how certain parts of my body would start to feel. 1st I could feel my face began to tingle. That was my sign to pull my buff up and cover my face. Soon after that my legs and belly went numb. That was my sign to pull out my home made skirt that i made into bibs from an old jacket. 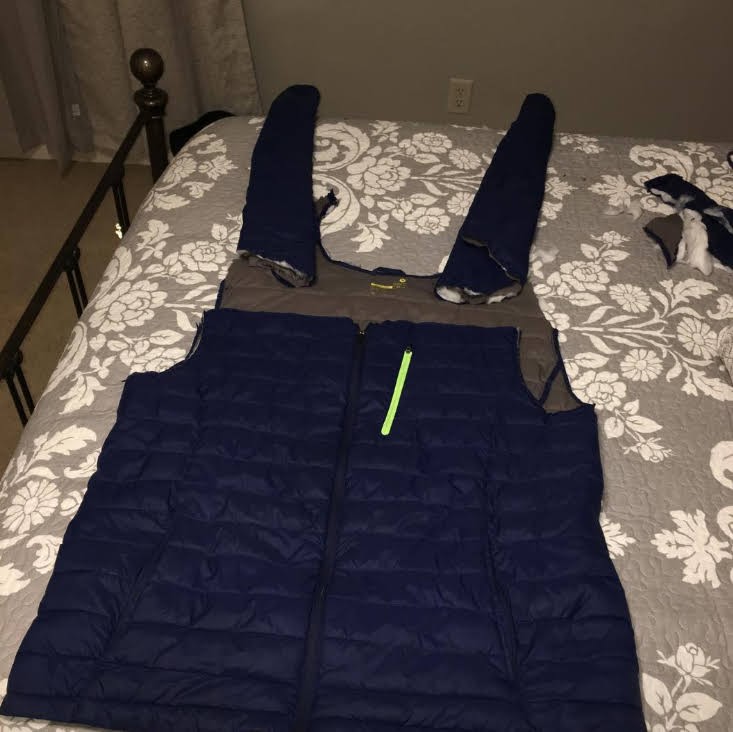 The last thing I wanted was to get pulled from the race for a little spot of frost bite. Finally my hose on my hydration pack  started to freeze up. That was my cue to put my thin down jacket on. Not long after that and I was toasty. My water was again accessible and thawed.

At about 4am the sleep monsters were already beginning to get some of the other runners. They would and pull over to bivvy. In my mind it was not the most ideal time to bivvy being as it was only the first night, and also that it was so damn cold. Just before daybreak we were pulling into the first check point. I had lost Paul, but picked up Steve Hayes a Brit from the island of Jersey off the northern coast of France. Paul was going a little faster than I wanted to go so I had to let him go. I had a hint of a cramp come on as well so that was my signal to dial it back a bit. It’s a long race. I knew I’d see Paul again down the trail.  I picked up Steve at around midnight.  We kind of stayed together until reaching the 1st check point. I was wet all over, but with my pulk set up I was quickly able to grab my clothes bag and shuffle into the warm check point with everything i needed and without wasting any time. Inside there was a little carnage but not too bad. A few competitors had already made the decision to drop. I changed into dry clothes and ordered up some breakfast. In these remote road houses you don’t have options. You either buy what the are serving or you go without. In my case I kindly asked what my option was and once the owner told me I enthusiastically said, “that sounds perfect.” I made the mistake of buying two sodas that were already cold. After drinking the first one while waiting for my breakfast I got extremely chilled. The cold liquid along with being a little dehydrated and cold from running in -28F must have dropped my core temp almost instantly. This happened to me before at my first Arrowhead so I recognized it right away. I quickly switched to coffee and got to someplace warmer. After hanging all my wet gear on the railing upstairs above the wood stove I knew that was the warmest place to hang out.  I sat up in the balcony overlooking the entire place. The only time I would venture down was to refill my coffee. Other racers were renting beds here, but I wasn’t tired yet. I would stay just long enough to get my clothes dried out and to stop shivering.

Steve and Paul were ready to go before me. Instead of rushing I took my time and figured I would try to catch them later in the day.  Below is Paul asking if I was ready to go. I was still up in my perch warming up. I think he has the exact same picture somewhere but from his position down below. This was me getting him back. 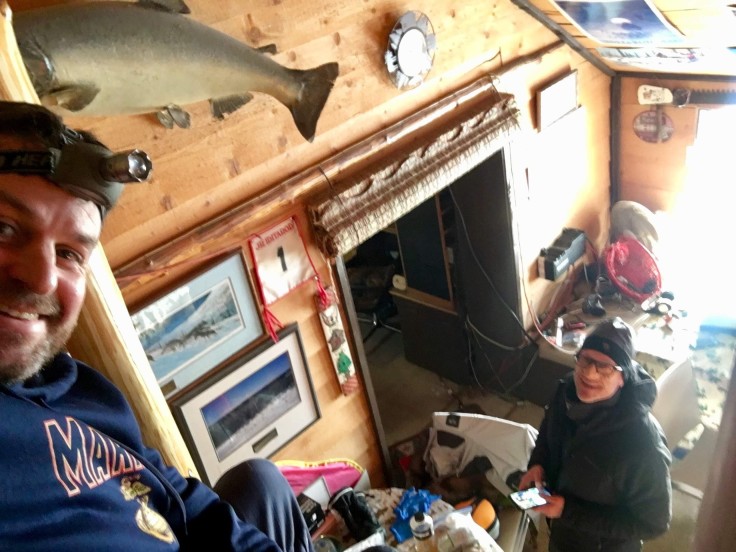 Day two was another absolutely perfect day. I gathered all my gear and headed out into the brilliant sunshine. Almost immediately after venturing out on the river in which we would be traveling all day I was passed by Maren Bradley, a dog musher from White Horse up in the Yukon Territory of Canada. She was flying and I later find out she is in the 150 mile race and that this was her first ultra. I could see she also quickly reeled in the runner up ahead of us who just happened to be the Iditarod legend Tim Hewitt, ten time finisher of the 1000 mile race. This was his 11th attempt I think. I caught Tim too as he stopped to have a little lunch. Thought out the first 150 miles i would keep my eye on him as he knew exactly what he was doing. You can learn a lot from racers with that level of experience. I had to introduce myself and thank him for doing the book with Jill Homer. I told him he was an inspiration to all us rookies. Check out Jill’s books about the Iditarod  on amazon at. (https://www.amazon.com/000-Miles-Across-Alaska-Journeys/dp/0692263365) 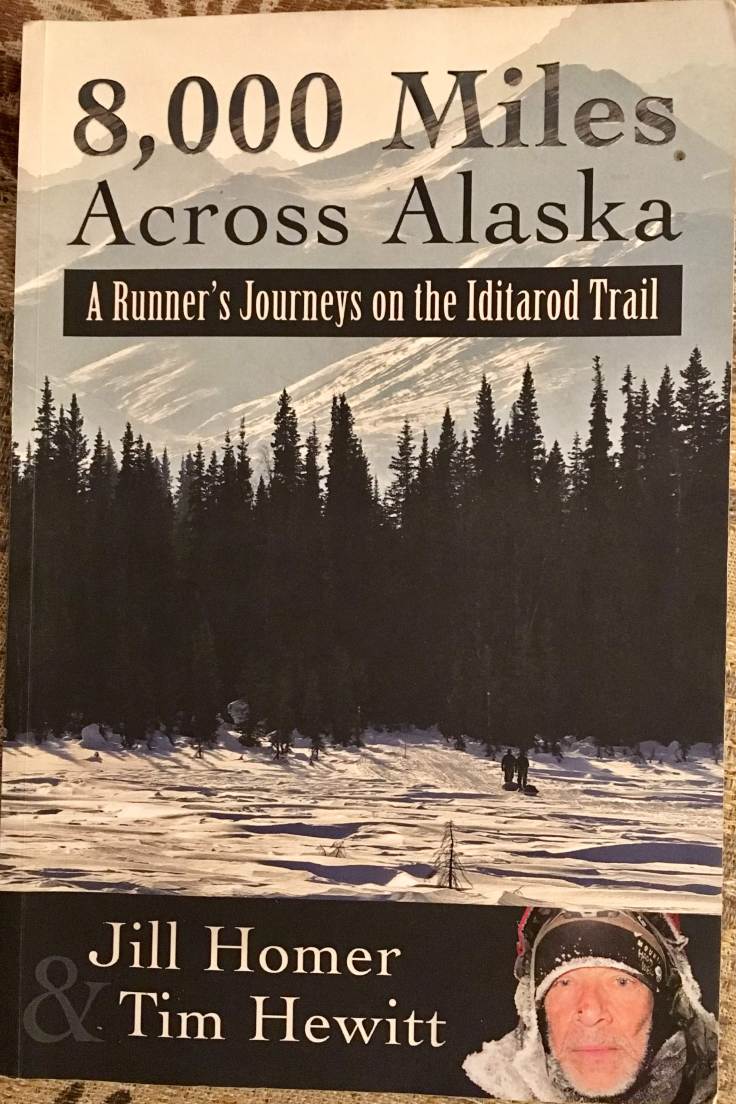 This book is a must read for anyone interested in what the human body and mind are capable of.

The Mountains were still about a 100 miles off, but with every passing hour they were getting closer.

While I was alone for much of the morning I just kept telling myself to keep moving. The race won’t even begin to start until we go over Rainy Pass which was still many, many  miles up ahead. I was like a kid in a candy store. I was enjoying every single step…………

Lover of life, family, friends, country, and ultra running. Not afraid to dream big because there are no limits. USMC Forever.

This is a text widget, which allows you to add text or HTML to your sidebar. You can use them to display text, links, images, HTML, or a combination of these. Edit them in the Widget section of the Customizer.